As divisive social issues in the United States continue to dominate headlines and employee headspace, companies are presented with a dilemma: “Should I take a stance, or should I stay silent?”

If you’re an HR manager or another company leader tasked with figuring out the answer, it’s a true double-edged sword. On the one hand, if your company takes action on the right causes in the right ways, it can improve employee engagement, strengthen the employer brand in the eyes of talented job seekers, and even attract increasingly socially-conscious customers.

On the other hand, taking an unpopular stance—or even a popular stance in the wrong way—can cause distraction, stir up conflict, or be tone-deaf enough to convince employees to go work elsewhere. Doing nothing, which can be misunderstood as an implied acceptance of injustice, can be damaging too (just ask Coca-Cola).

For insights on what companies should do in this tricky situation, Software Advice’s Social Justice Response Survey* asked close to 500 U.S. employees for their thoughts on how their employer has responded to social justice issues so far, and what they wish their employer would do in the future.

What we learned is that employees can be equally divided on what companies should do, but there are indicators that can push companies in the right direction on when and how to act. Employers are split on how to address social justice issues 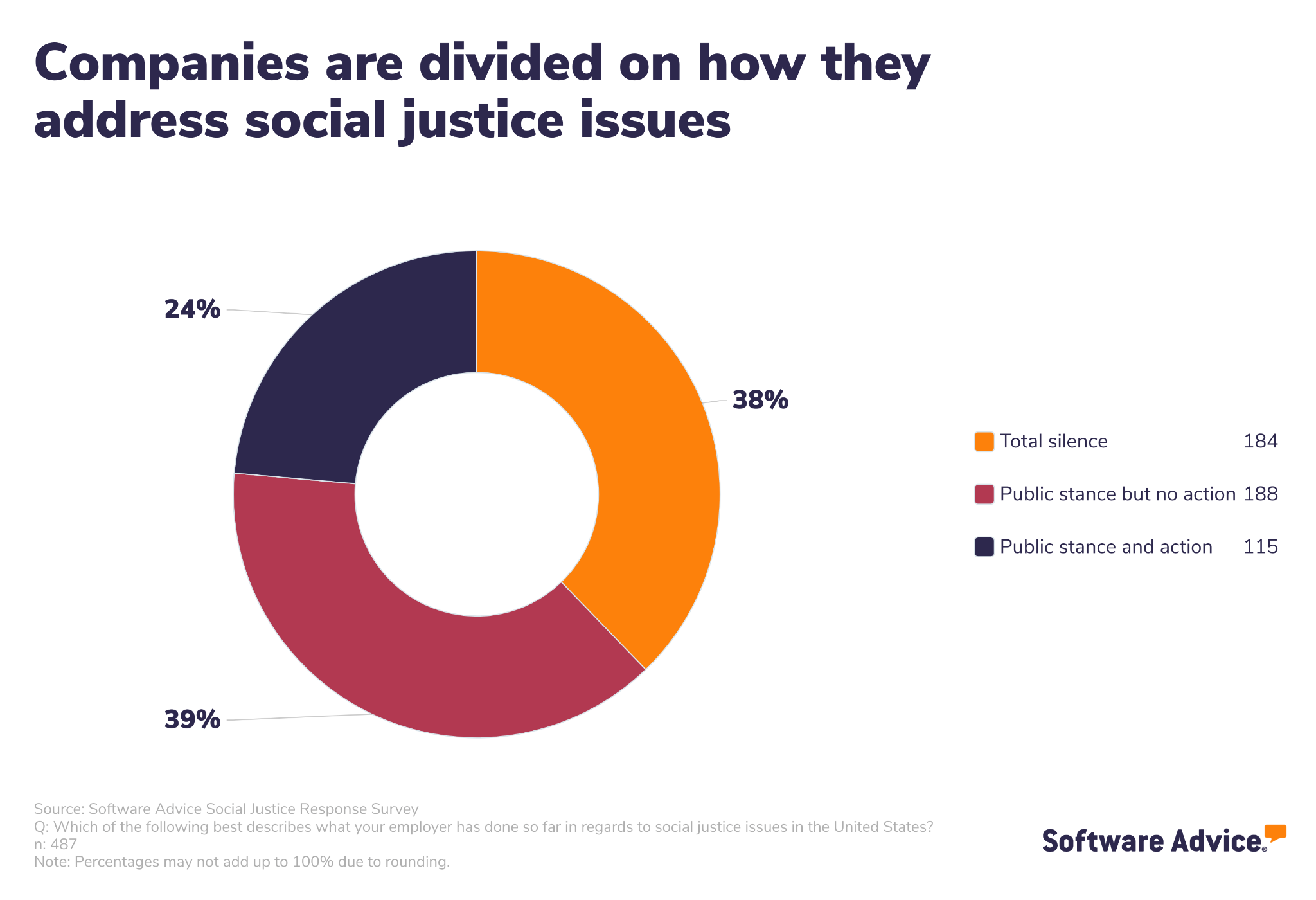 Digging deeper, we notice a few trends. Likely because they face less scrutiny (internally and externally), we find that smaller companies tend to remain silent on social justice issues more often than larger companies: 43% of workers from businesses with five to 100 employees said their employer has been totally silent versus 27% of workers from businesses with more than 1,000 employees.

We also find that out of all the industries represented by at least 30 responses in our survey, construction firms take the silent approach most often (47%), while retailers and restaurants are most likely to take a stance and perform follow-up action (28%). Restaurants in particular have been eager to tap into social justice issues, which has produced both newsworthy success stories and notorious misfires.

Aside from a few tendencies though, our data highlights the divergent paths that companies have taken on addressing social justice issues up to this point, adding to the confusion on what the best strategy is. A Gartner survey exemplifies this conflict perfectly: 51% of CEOs from North American companies believe that taking a public stance on social justice issues is good for business, while 49% believe it’s potentially damaging, or have no opinion (full research available to Gartner clients).

Social justice issues are nuanced and complex, and your company’s role within them can be influential or inconsequential. As such, there is no one-size-fits-all strategy that every business should take when addressing these types of issues. HR leaders should work together with executive leadership and PR on each issue separately as situations develop internally or in the community to come up with an appropriate response.

When deciding on how to tackle social justice issues, your employees may be able to provide clarity. If an overwhelming number of workers are passionate that your company should take a certain stance or perform a certain action, the potential backlash from not doing so could be substantial.

57% agreed with the statement—a majority, but not an overwhelming one. Here again, a few trends emerge when we look at different demographics:

However, there is no situation where we end up with more than three-quarters of employees agreeing or disagreeing that their employer should take a public stance on social justice issues.

Less than a third of respondents (30%) fell into the sweet spot for employers eager to act—believing both that taking a stance is good for business, and that their co-workers have similar opinions on social justice issues and the actions their employer should take.

Q1: Overall, do you think your employer taking a public stance on social justice issues helps or hurts the business?

Q2: Which of the following best describes you and your co-workers’ current opinions on social justice issues in the United States?

If it wasn’t obvious before, these results highlight that any social justice response strategy you go with is unlikely to make every employee in your organization happy. Company leaders should work together to gauge the employee response to any given strategy, and go with the one that will produce the most benefits or the least amount of backlash.

This is where something such as an employee pulse survey tool can be invaluable. Using these tools, you can poll your workers and get a “pulse” on how they feel about divisive issues. You may learn that a lot of workers are eager for you to take action, or that they don’t care one way or the other. You can also learn how much damage a certain response has the potential to cause.

The opinions of other stakeholders, such as customers, should be taken into consideration too. But with pulse survey tools, there’s no excuse for not knowing where your workforce stands.

It is impossible and impractical for your company to speak up on every social issue. At the same time, the days of companies completely staying out of divisive societal issues are over. Saying nothing at the wrong time can do lasting damage to your employer brand.

So when should you take a stance? And how should you go about it? Here are our three tips for how to address social justice issues and do right by your employees.

1. Give up on being an apolitical…

Read More:When Should Your Business Act On Social Justice Issues?