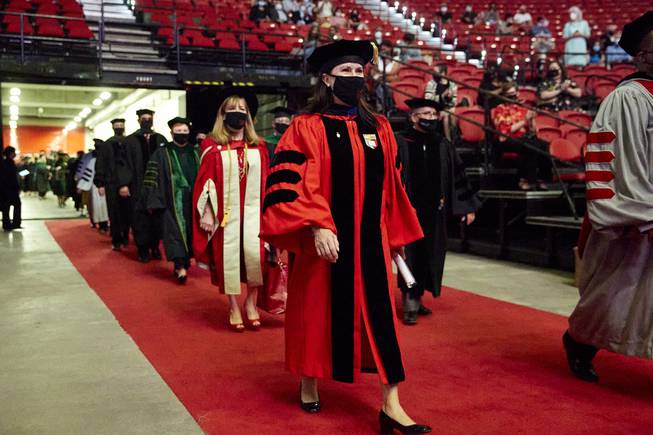 Melody Rose, chancellor of the Nevada System of Higher Education, attends a UNLV graduation ceremony at the Thomas & Mack Center.

In Chancellor Melody Rose, Nevada may finally have found a leader who is able and willing to demand accountability in the state’s higher education oversight structure, which for too long has been a rat’s nest of corruption, abuses of authority, gender discrimination and mismanagement.

This week, Rose leveled explosive allegations against Nevada Board of Regents Chair Cathy McAdoo and Vice Chair Patrick Carter, accusing them of creating a hostile work environment for her in an effort to oust her from her job. Rose’s complaint prompted Regent John T. Moran to call for an emergency meeting to replace McAdoo and Carter with a new chair and vice chair as Rose’s complaint is investigated.

That would be an appropriate move, given the seriousness of Rose’s claims. In her 21-page memo to the general counsel of the Nevada System of Higher Education (NSHE), Rose paints a shocking picture of the top two regents undermining her authority, withholding information from her, micromanaging her and her staff, witch-hunting for reasons to fire her, and possibly committing open meetings violations in a quest to remove her.

She describes McAdoo as having a low opinion of women leaders, and quotes her as saying she was “tired of all the ‘women’s leadership’ talk in the office.” Rose further accuses McAdoo of inept and irresponsible leadership on COVID-19 precautions for students and staff, saying McAdoo ignored her recommendations and instead prayed to God for direction, gave her conflicting signals and, perhaps most shockingly, called one of Rose’s staff members to report that she’d received divine guidance on a plan for the system and asked for Gov. Steve Sisolak’s phone number so she could present it to him.

There’s much more in the complaint, but none of it will come as a surprise to anyone who has watched the regents and Rose’s predecessors closely over the past several years.

The regents, who oversee the chancellor and NSHE in a way similar to a K-12 school board’s relationship with a district superintendent’s office, have long been accused of overstepping their authority, meddling in day-to-day university affairs, bullying personnel and allowing an environment of gender discrimination.

These and other problems had a common root: those in power refused to hold themselves or others accountable for inappropriate behavior. Instead, the regents and former chancellors did each others’ bidding and covered for one another.

Nevadans saw this time and time again. When former Chancellor Dan Klaich was outed for presenting a falsified document to Nevada legislators in an attempt to mislead them into adopting a new funding formula for higher ed, the regents allowed him to resign and gave him a golden parachute.

When the Sun revealed a trove of emails from former Regent Kevin Page showing him clearly abusing his authority by sharing confidential documents outside of the system and demanding preferential treatment for a relative who was attending UNLV, he faced no consequences beyond being told by the board’s chair to quit sending so many emails.

When former regents’ counsel Dean Gould demeaned former Regent Lisa Levine by threatening to mute her during a virtual meeting if she continued to “child-speak,” he wasn’t reprimanded and no one in the meeting called him out for his abhorrent behavior.

Those are just a few examples of how this gang has operated. Meanwhile, their meddling and browbeating of staff have caused disruptions throughout the system and particularly at UNLV, where there’s been a revolving door of presidents over the past 15 years.

All of this runs counter to the mission of a regent, which is to advance the cause of higher education. For too long, many of Nevada’s regents, with their nonstop meddling, corruption, self-interest and manifest incompetence have harmed Nevada’s universities and colleges by making it impossible for professionals to do their jobs.

Rose, in her complaint, said she learned about the reputation of the Nevada regents and NSHE after becoming chancellor in September 2020.

“Upon my arrival, I immediately heard stories about NSHE’s persistent disregard for female employees,” she said. “System administration colleagues, presidents, reporters and community members warned me about a pervasive sexist culture and wanted both to alert me to this ‘Old Boys Club’ environment and to ask for my assistance (in) changing it.”

Rose took a courageous step in that direction by blowing the whistle on behavior she believed to be inappropriate.

It’s important to note that Rose’s accusations are unproven at this point, but they deserve a full and independent investigation. It appears Rose took meticulous notes, and she claims to have witnesses who can back up her claims. If what she’s saying is shown to be accurate, McAdoo and Carter should not only be removed from their officer positions but from their seats on the board.

Meanwhile, neither McAdoo nor Carter has responded to the accusations, and NSHE responded to a request for an interview with Rose by saying the system doesn’t comment on personnel matters.

Time will tell how the situation turns out, but it’s commendable that Rose called out what she clearly feels is inappropriate behavior.

“Though it is deeply upsetting to me to provide these unsavory details, I believe that only by surfacing the violations of the current officers can the integrity of the Board of Regents be maintained,” Rose wrote in her complaint. “To withhold these abuses of power would be in my view tantamount to disrespecting NSHE as a public body, the taxpayers who fund our work, and the students who depend on us to work honestly and to be model public servants.”

Very well put. Nevada has been overdue for leaders who would hold each other to high standards of conduct, bring bad behavior to light, seek investigations and establish accountability. That’s the disinfectant needed to clean up this “Old Boys Club.”

Rose, a little over a year into her job, is giving indications of being the change agent that the system has long needed. She displayed strong leadership on pandemic precautions, and in a recent interview with the Sun editorial board and news staffers, gave encouraging answers to questions about her philosophy on managing university presidents, higher ed funding issues and repairing the relationship between NSHE and UNLV supporters who had become disgusted over the regents and former chancellors.

With the exception of Moran, though, the regents are moving too slowly toward resolving the situation.

Typically, the regents’ response to matters like this has been to circle the wagons, protect the status quo and let things blow over.

That can’t be allowed to happen in this case. Business as usual is bad for the business of higher education. Allegations of a toxic workplace in the very place that is responsible for teaching the next generation about how to succeed in non-toxic workplaces take on a significance that cannot be overstated.

The regents need to step up and deal with these allegations ASAP. At a minimum, there needs to be a meeting and a public vote so Nevadans know which regents are supporting the environment and which ones are concerned about it.

In the meantime, it is best for those being charged with this bad behavior to be moved aside — that job is for the regents to do. Unless, of course, they agree that toxic workplaces are OK in the state of Nevada.