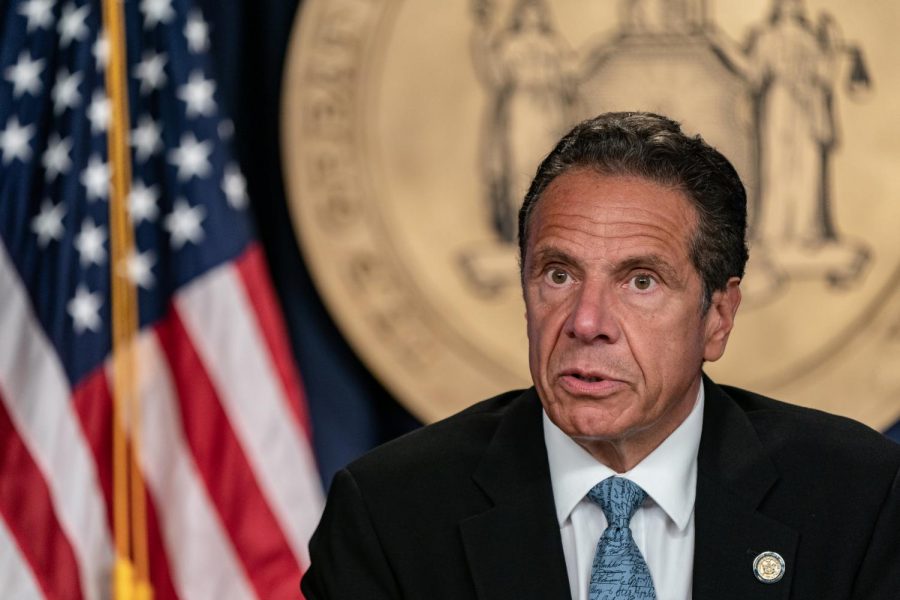 New York Gov. Andrew Cuomo speaks during the daily media briefing at the Office of the Governor of the State of New York on July 23, 2020, in New York City.

Like many politicians before him, Cuomo has denied ever touching anyone inappropriately, almost satirically citing his Italian upbringing as reasoning for his actions. Sadly this is nothing new, adding another link in the politician sexual assault chain.

This dates back to Thomas Jefferson having an affair with his slave. Jefferson granted Sally Hemings multiple privileges and eventually freedom in exchange for intimate relations that led to multiple children. Contemporary backlash was directed at Jefferson for his actions, but this is a historical footnote next to his legacy as a founding father. It remains to be seen how history will remember Cuomo, but the similarities are obvious. These men were some of the most powerful people in their period and took advantage of that status.

What links Cuomo’s inappropriate actions with Jefferson’s is political power. This appears to be the driving factor influencing these men to take advantage of victims. Powerful politicians are able to exploit those below them with a workplace dynamic only they can control. Psychology can help explain this correlation.

Politicians tend to be more assertive, bold and extraverted. These traits assist in debate with the opposition and comradery with like-minded thinkers. Negotiation and persuasion are how politicians reach their high positions which can also lead to a bloated ego. The bloated ego is best represented by former President Donald Trump. His personality is full of narcissism and being the center of attention. These traits helped him gain wealth and power by exploiting others, and it isn’t shocking to find the long list of sexual assault victims he left in his path.

The personality traits of sexual harassers are eerily similar. They tend to have an inflated view of themselves, often questioning victims for not wanting their attention. Harassers tend to make moral excuses for why they act the way they do – something along the lines of “back in my day, this was acceptable behavior in the workplace.” Sexual harassers also tend to have a commanding power dynamic over their victims. The perpetrator longs for dominance and control at the expense of their victim. Rewards and promotions in the workplace are often dangled in front of the victim to mentally influence and lock them in the harasser’s control.

To understand the scientific approach you have to apply the real-life story involving Cuomo. He is a man of great wealth and power, spending his days away in his 40-room Victorian brick mansion. The seat at the helm of New York has been in his family ever since a young age, with his father Mario serving as governor from 1983 to 1994 with the eventual election of Andrew in 2011. Cuomo has known politics and control his whole life. If you want to understand the man, just take a look at his license plate backing his vintage Pontiac GTO reading one single character — “1.”

The same characteristics that made Cuomo a successful politician also led him to be a sexual harasser. The unwarranted kissing and hugging of fellow employees played off his lust for power and control. Inappropriate sexual conversations opened the door for these actions because repercussion was never feared with such a large influence and ego.

Cuomo is the cut-and-dry example of a power-hungry politician and sexual harasser. Cuomo said at a recent news conference that his “usual custom” is “kiss and hug and make that gesture,” adding that he “understand[s] that sensitivities have changed and behavior has changed, and I get it and I’m going to learn from it.” This is a cut and dry moral excuse for sexual harassment.

What will remain of Cuomo and his legacy is unknown until the dust settles. What is known, however, is the $18 million in campaign money with seemingly no place to go. Even after his shameful resignation, Cuomo’s political power could endure by virtue of his campaign funds. Leaders of his stature rarely lose all influence, even in disgrace.

Something drastic must be done. Make Cuomo an example and send a clear message — there is no room for sexual misconduct in United States politics.

Ben Mankowski primarily writes about politics, economics and personal advice. Write to him at [email protected].